The San Miguel Beermen notched its sixth straight victory after beating Barangay Ginebra, 72-70, in the PBA Philippine Cup on Sunday at the SMART-Araneta Coliseum.

The Beermen remain atop the league standings with a 7-1 record, with Rain or Shine trailing behind at 5-2.

Despite getting only 11 points from reigning MVP Junemar Fajardo, SMB coach Leo Austria was pleased with the performance of his players, who fended off a late Ginebra comeback.

“This kind of game is what we need right now going into the next three games. Because we’re up against the number two team, Rain or Shine, GlobalPort and then Talk ’N Text,” said Austria.

“We need a win to get the outright (one of the top 2) if I am not mistaken. But for sure two wins assured ka dun sa one of two slots. But of course we will concentrate first on our next game.”

The top 2 teams at the end of the eliminations will get a twice-to-beat incentive in the quarterfinals. 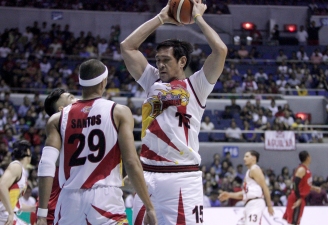