The sneakers that Nike will release for Mamba Week

Nike’s Mamba Week is a celebration of Kobe Bryant’s legacy both on and off the court.

Kobe’s remarkable impact on the game of basketball also applied to footwear design. Throughout his career, Kobe pushed Nike Basketball to explore the competitive advantages gained through low-profile, highly-responsive design. It was an aspirational challenge as much as it was a technical one.

“Every game, I write on my shoes, ‘Be Legendary,’ which is what Kobe signed on my shoes back in 2016,” says Phoenix Suns guard Devin Booker. “He’s had an impact on my life that no one’s ever had, and probably no one ever will have again. He taught me to ask myself, ‘What am I doing here if I’m not trying to be the best at it?’ That not just a basketball quote. That’s a life quote for me.”

Booker is far from alone in his admiration for Bryant. From Sabrina Ionescu, guard for the New York Liberty: “The beauty of basketball, for me, is that it’s a sport you can never perfect. What made Kobe great was that he wasn’t scared to try new things, because that risk of failure is where you grow. Kobe tried to perfect everything about his game, from the way he played to the way he approached the game.”

Commemorating his legacy within Nike Basketball and beyond is a seasonal footwear collection that spans memorable colorways of the Kobe V Protro, in addition to a limited-edition jersey. 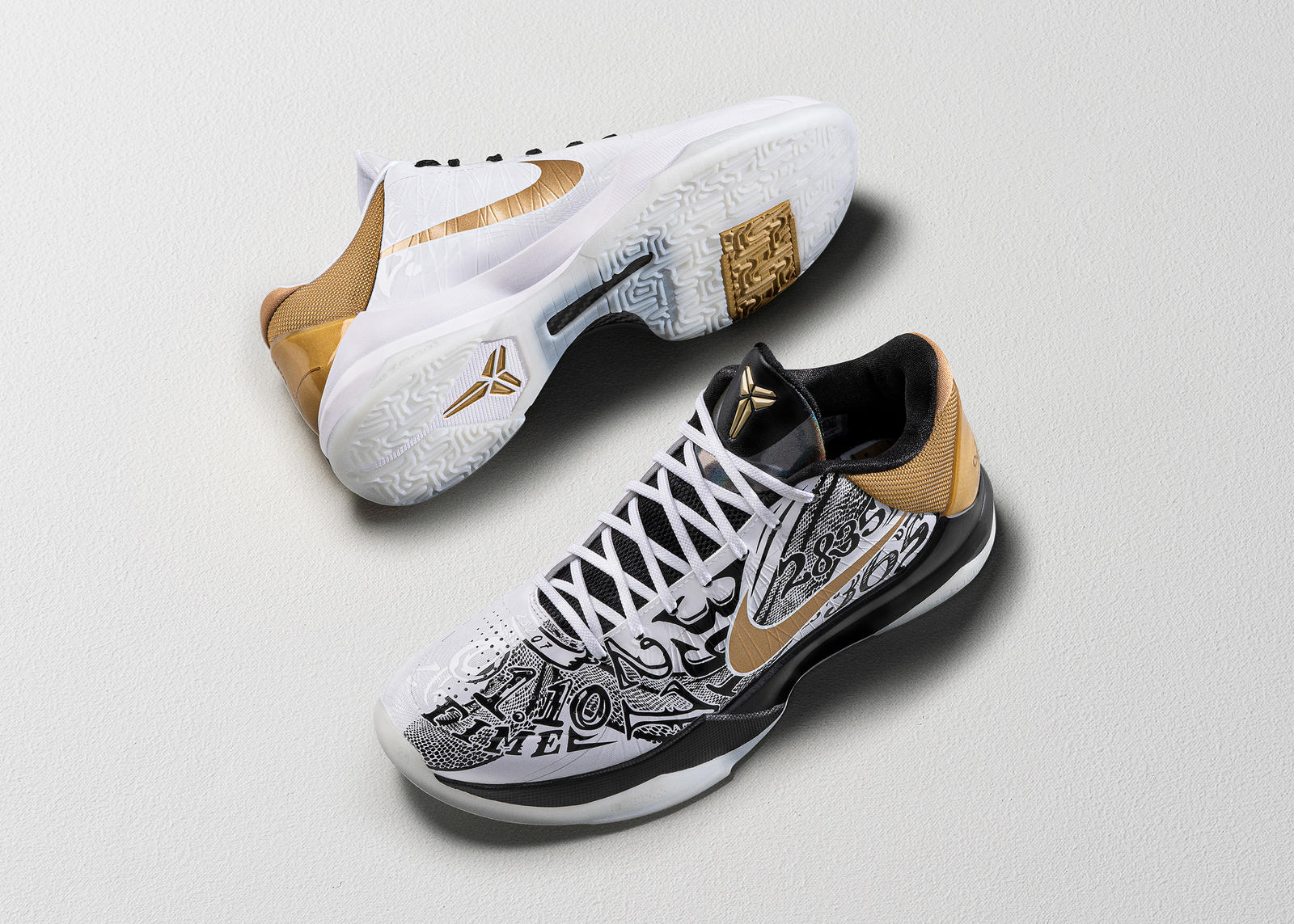 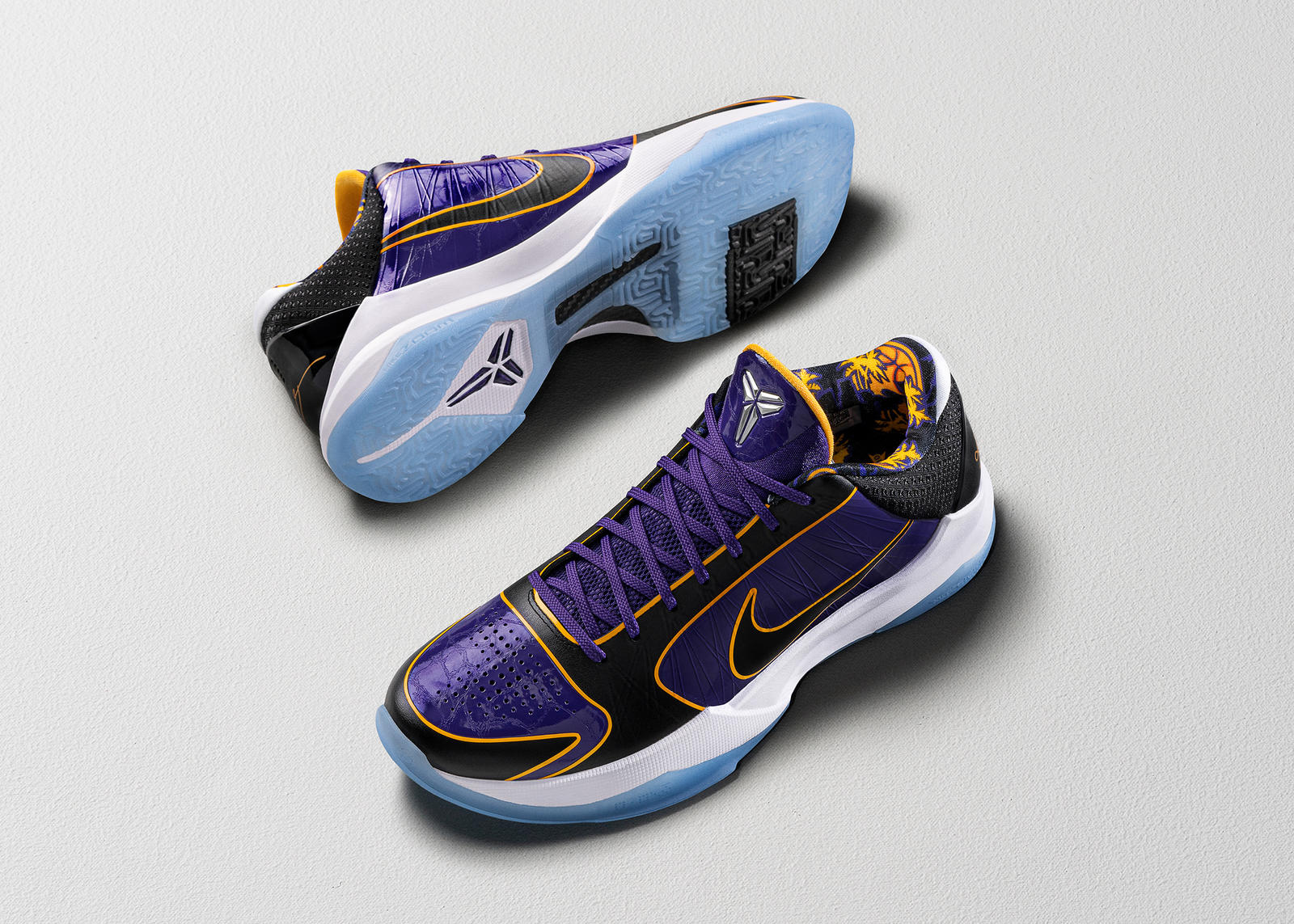 Kobe Bryant’s commitment to the game on and off the court reflects the Mamba Mentality that drove him to become a five-time champion and one of the greatest athletes of his generation. The Kobe V Protro 5x Champ reinterprets the championship-themed jackets gifted to Kobe after his second and third titles. The shoe retains its patented leather finish in purple and black with gold accents, and the insole features a five-star graphic print. It releases August 24 in North America. 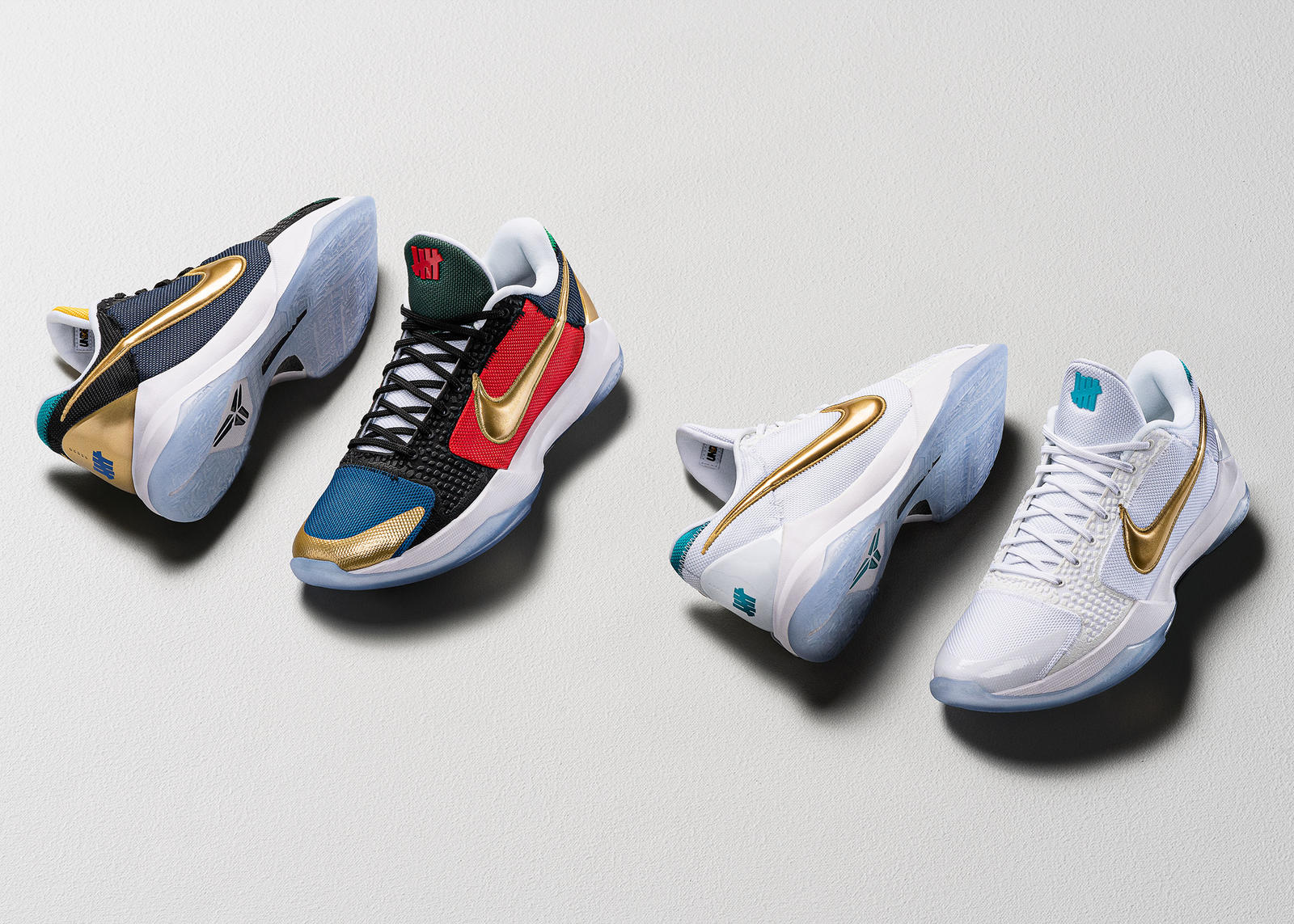 In June of 1996, 12 teams passed on Kobe Bryant in the draft. One pair in this Undefeated two-pack collaboration is comprised of a combination of colors from those 12 teams, while the other pair includes colors from the franchise that made the trade, symbolizing the What If? motivation that drove him to outwork his opponents. Both pairs feature gold accents that reference his career championships. The pack releases August 27 in North America at Undefeated stores. 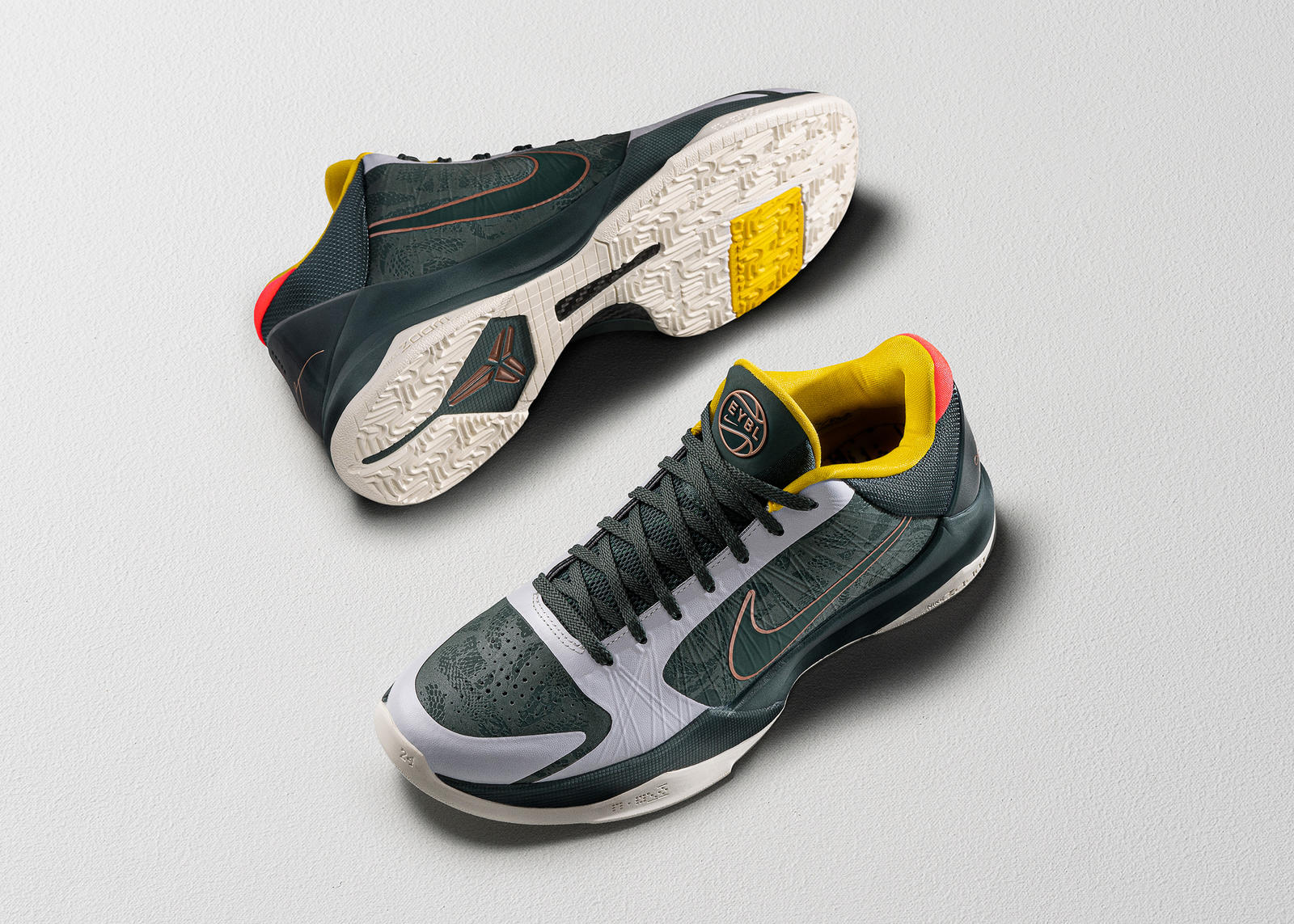 Inspired by the mythological character Medusa and her ability to freeze onlookers with a single glance, the Kobe V Protro Girls EYBL features a green upper, gold accents and scaled detailing. The shoe releases August 29 in North America. 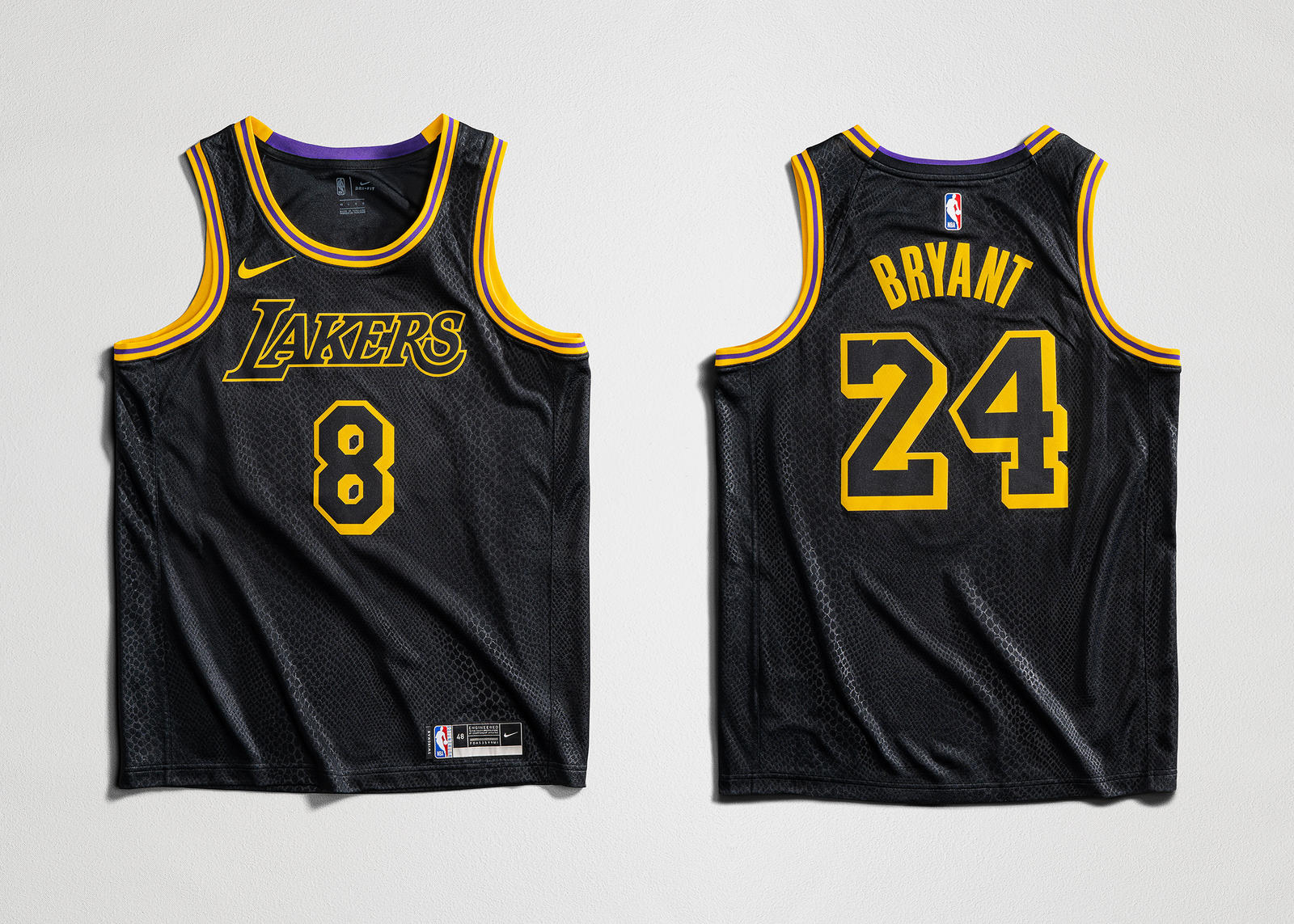 Originally released in 2017 as part of Nike’s Lore Series and co-designed by Kobe, the Black Mamba-inspired Lakers City Edition uniform returns. The jersey features a faux-snakeskin print, 16 stars on the side panels and the scoop neck from LA’s Showtime-era uniforms. Both of Kobe’s retired numbers, 8 and 24, grace the jersey, an arrangement that symbolizes Kobe’s career and the day dedicated to his impact on the game. The jersey releases August 24 in North America.